I’m in a good place at the moment. I’m in Exeter and I want to start working again, I need to be busy. I want people to hear my story, from me. My words, my stories. I call it ‘The Good, The Bad and The Ugly’! There’s a lot of good, a little bit of bad and a tiny bit of ugly. Although I can’t do a good Clint Eastwood impression and my shooting wasn’t as good as his either!

In terms of work, I’d like to do holiday camps over the summer, at places all over the south-west, like Torquay or Dawlish. I was at the Langstone Cliff Hotel in Dawlish over the weekend, it’s a nice place. I want to tell people my story, about my experience of life. I’d like to do all sorts of things, like shop openings, signing sessions and football tournaments, where I can give advice. I can do presentations, talks and visits to schools, if headmasters want to get in touch. For all ideas, just email me through my website.

I love to do presentations, so I can show everyone the DVD of my career and tell them my stories. You can buy my life story DVD directly from Midnight Productions and I plan to do some signing sessions for that in the south-west in the weeks ahead. Keep a look out and make sure you follow me on Twitter for the latest details. And all the stories are true. I know, because I was there!

I’m so pleased Palace stayed up. I knew they wouldn’t go down. I had faith, in the players and the management. The atmosphere at the Middlesbrough game was incredible, like old-fashioned football. The atmosphere was fantastic, from both sets of fans. I saw the last few minutes from the Directors’ Box and the tension was amazing. When I went inside to the restaurant, for the post-match talk, everyone was smiling. They didn’t need to say a word! Palace have a great chance to have a really good campaign next season and maybe have a good cup run. All fans enjoy that and Palace fans are the same.

I’m surprised Palace haven’t appointed a new manager yet. I was a bit taken aback that Big Sam left, but I respect his reasons. Personally, I‘d love to be involved and pass on my knowledge to the players. I know I can help. I was offered the Palace job once, a two-year contract, but let’s say I got a call later and the deal was off, which was a shame. I’d have loved it. I’d like to see an English manager at Palace. I’d like to see Glenn Hoddle there and for me to be around and give my input. I’ve got a lot of respect for Glenn and I’m a Palace man. And Arsenal of course! Mark Bright is there as an ambassador and I’d love to be involved in the training. I have lots of ideas of how to help. That would be a dream to me. I know I have knowledge, for how to win games and defending. I’d love to have that opportunity to do it for real. 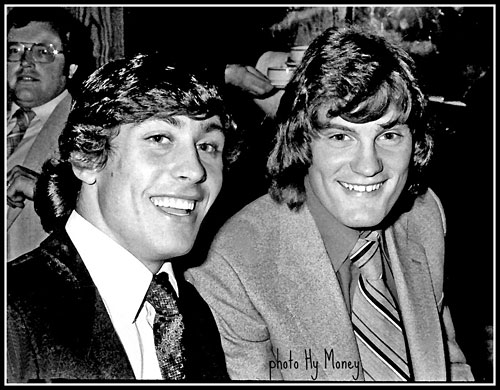 Me with Glenn Hoddle – in our younger days!

Arsenal are usually consistent and they had some good results last season, like beating Chelsea 3-0, but they were very poor in other games. For the cup final, neutrals would have expected Chelsea to win the FA Cup, but Arsenal made them look an average side at Wembley. When you do that, it frightens teams. Arsene Wenger will want to prove a point next season. I think you’ll see a different Arsenal. Wenger will say that we’ll concentrate on the Premier League. He’ll mention not being in the Champions League and it could work out in Arsenal’s favour not to be in it.

With the way the season ended, I think Wenger will want to do something next season. I’d like to see him show the passion he did when he first joined the club. He knows he has a point to prove. He needs to keep key players – Sanchez, Chamberlain, Giroud and Ramsey. They’re four very good players. I’d like Giroud to be the main striker. Chamberlain is very important. If players aren’t performing, you tell them. If they’re doing well, you don’t drop them. Wenger used to hug his players. Mourinho used to do it, stick up for them. Conte did it and I think that is a secret with the players, the players can think “I want to do it for him next week”. Players need that.

England’s two recent matches in Scotland and France looked like two friendlies. I think there is more to come from these players. They should have gone at Scotland from the start. You look at the two free-kicks we conceded, we don’t seem to know our best goalkeeper. You need to trust your keeper. We have a very good attacking squad and we need to make the most of it. Players might say they are tired but players are fit. You want players to have a good attitude, even at the end of the season. I think we have a very good squad and there is more to come. I’m hoping that Gareth Southgate will make brave decisions. Play players in the right positions, doing the right things and they must have a Plan B. If your main plan is sussed, you can shout ‘Plan B!’ and everyone knows what it is and switches to it. Like you get half a yard of space and get crosses in from both wings and get Alli in for headers.

I was asked recently what my England goal celebration was. And I said “I don’t know’! I only scored once. It was a 5-0 World Cup qualifier, against Finland, at Wembley, in October 1984. We were 4-0 up and Bobby Robson told me we needed to keep scoring, because goal difference could be important. I threw the ball into midfield from the half-way line. Ray Wilkins played it out to Mark Chamberlain on the right, Alex Oxlade-Chamberlain’s Dad. I kept running, literally to the penalty spot. I must have been about 14 yards out. The ball came across from Chamberlain. Mark Hateley took a swing at it with his right foot, but it went through his legs. And it came to me. I just swung my right foot at it – like a bad golfer – and it went in. But I didn’t know what to do! I just stood there! Then my teammates jumped on me! So I didn’t score many for my country, but at least I got one.