I’ve got a good feeling about England’s chances at Euro 2016. At the end of the day, it’s about the players needing to perform and do their job on the pitch.

If all the young talent put their individual ability into the team spirit, we could surprise people. The players can take heart from Leicester’s performances and gel together.

We need to be able to surprise the opposition, because they will look to surprise us. We must be ready. Do not be afraid to try something a bit different on the pitch. That can win you the game.

For instance, if a team have a certain way of playing we must be ready to cope with that and anything else they have that’s a bit unexpected.

We need to be prepared for free-kicks. For and against. For, it’s important to have something up our sleeves when it comes to free-kicks. Against, we must know how to deal with them from opponents and be ready for any surprises.

Winning is about more than just the team on the pitch. It’s coaches, management, staff, the people watching on the bench. If the kit man has an idea, try it.

The opposition will have been watched. Do we notice any changes? We must get that across to the players as soon as possible. It could be small things, but they might make all the difference.

You need talkers on the pitch to be aware. We need to be aware of where they can hurt you and where we can hurt them. Don Howe used to say this. That’s when the players and the staff become a very big part of the team. 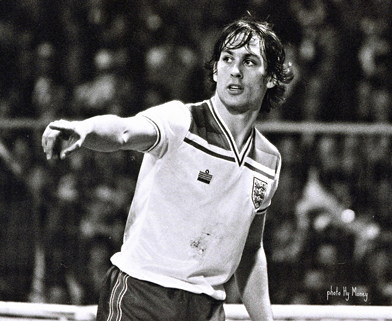 Small things can make all the difference

Terry Venables would have free-kicks planned, for all positions, for all over the pitch. Even from throw-ons – which is as good as a pass by the way – in our own half. We would get a shot, a cross, a switch of play, or purely get into the other half of the pitch.

All the players knew what to do and what position to be in. It was planned that well. We got many great results from doing this well, when I was at Crystal Palace.

Players don’t always do what you expect them to. At school, an opponent went to tread on my foot, which made me look down, but he slapped me around the head. I learnt from that very quickly! As Bruce Lee used to say, don’t take your eye off the opponent!

It’s really important for players not to lose their temper or get wound up. This will go on. Dele Alli could be a target. It’s easier said than done and it doesn’t mean you don’t tackle, but the mistake you make could cost your team the result.

I played for England against Morocco at the 1986 World Cup in Mexico where Ray Wilkins got sent off. Ray got frustrated and threw the ball at the referee. Although Maradona got away with pushing the ball into the goal with his hand! The best way to wind up an opponent is to play better than him.

By the way – this is just for England fans, players and staff. Don’t let the opposition read this please! Enjoy the tournament. I’m looking forward to it and I’d like everyone to enjoy the challenge. KWS

(My nickname at Arsenal was Kenny White Shorts, as I never got my shorts dirty!)